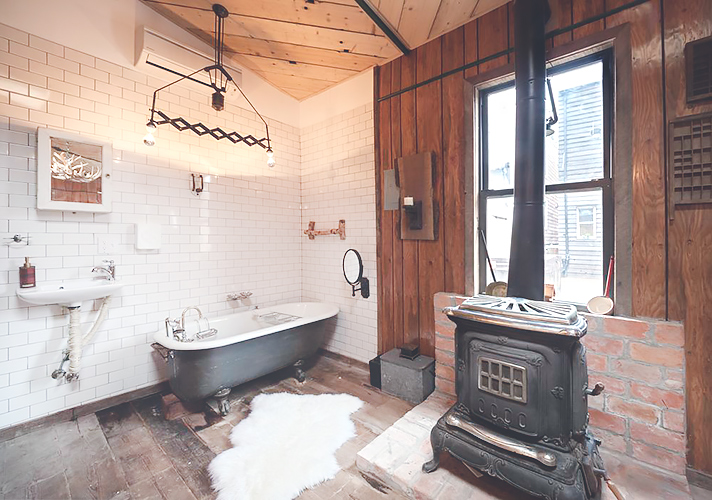 All over the world residential houses are being converted into bed & breakfasts, but very dew of them turn out to be a such a jewel as the Urban Cowboy project located in the Italian neighbourhood in Williamsburg, New York.

Lyon Porter, 33, works in the real estate business in Manhattan. So he knows, which areas in and around New York are up and coming. Williamsburg, a borough of New York in Brooklyn, with a spectacular view to the skyline, has been a kind of economic miracle over the last years. 1000 new shops, bars and restaurants have emerged here and on the hip scale it is miles in front of Berlin. Because the prices in the centre of Williamsburg have almost become equal to those in Manhattan, Porter bought an old house a little further east – in a very quiet, Italian influenced residential quarter. Just for your information: When you take an afternoon walk down Powers Street to the Urban Cowboy, you get the feeling, that you’re at least three hours away from Manhattan. In reality, Union Square (14th street) is only about 12 minutes away by subway. Entrance to the Urban Cowboy. The view to Manhattan from Williamsburg

The building itself is not very spectacular, especially from the outside. No sign, no reception, not even the neighbour knows, what’s really going on here. However, Lyon had some very creative ideas for the interior. He combined Red Indian stuff with Brooklyn stuff. Some rooms are connected and Lyon would like to have all the guests, that arrive from all over the world, get to know each other. That is one of the main reasons why so many young people travel to Williamsburg in the first place.

Future hipsters, who really want to be hip (and who can tell their friends via Facebook and Instagram, that they are currently staying in one of the newest establishments of Williamsburg).