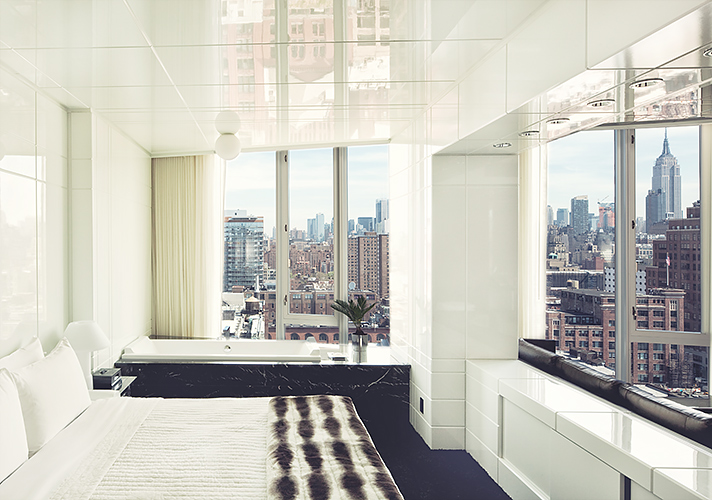 Spectacular: the view from the rooms

The Standard, Highline, from hotelier André Balasz in the meatpacking district has been the centre of the party scene for the last few years. Although, because the scene regularly needs something new, the hotelier has now opened a second Standard Hotel in the East Village. The question remains: Are they any good, these guesthouses?

A visit to the established Standard hotel at Highline Park always starts with a bang. This is because nearly all the rooms have this unbelievable view of the skyline – either to the south with its new One World Trade Center, or towards Midtown to the Empire State Building. You could actually just spend all day in night in your room admiring the skyline, how it appears slowly out of the morning fog, or when it reflects the setting sun in the evening. On saying that, the Standard is not the kind of hotel where you stay in your room, but a well organised party park with 337 rooms, two bars, a beer garden and a restaurant that is still very beloved by the scene. It calls itself The Standard Grill and fulfills its function: many of the guests dine in a darkened room at cosy tables and are served very efficiently. By 10 at the latest, you should make your way to the roof terrace bar, Le Bain, where the doormen are not quite as strict as they used to be.

The positive thing about it is: those who wish to celebrate in New York and don’t have a problem with not meeting too many New Yorkers in the bars and clubs (but other tourists), they have come to the right place. A party district has established itself around The Standard, Highline and you get the definite feeling that the core is right in the middle of the hotel.

A party district, that is populated by a great many tourists always means something special to a locality: Let’s move on and conquer another neighbourhood. One part moved completely to Brooklyn, respectively Williamsburg. And the ones, who wanted to stay in Manhattan are now attempting to conquer the East Village. East Village in New York has always been a very popular quarter for living peacefully in the city. However, this has been changing over the last few months. Since the opening of the new Standard East Village, the region is now developing into a hipster place. The building itself is not that pretty, but the bar on the ground floor shows us: Hotelier André Balasz, the founder of the Standard brand, knows exactly what he is doing! There used to previously be a hotel in the building called Cooper Square Hotel, which had a bar on the first floor, that nobody really visited. Of course, the “Café Standard” could just as well be located in Amsterdam or Lisbon – New York has always been good at copying – but in New York, in the deserted East Village, it appears somehow to be much more interesting.

The new Standrad in the East Village.

With an elegant bar… 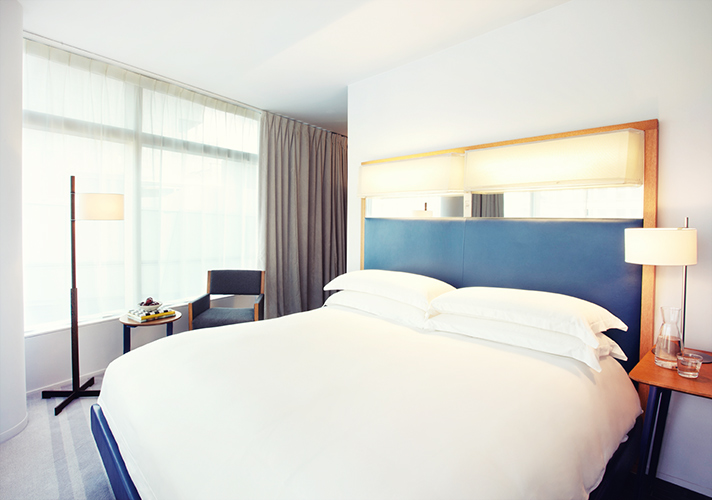 The rooms in the new Standard are nice, designed by Antonio Citterio, and just like in the Standard High Line, very snug. We’ll probably have to give the hotel some time, to see if the area will become interesting for tourists, make sure there are enough good restaurants and bars around the corner and that we don’t go into lonely hipster mode. But this building has something special too: a perfect view to the ever beautiful Manhattan skyline.

The Standard hotelier André Balasz offers flights in his own Standard 8-passenger sea plane, that brings you from East 23rd street to the Hamptons.
More informations here: http://stndair.com