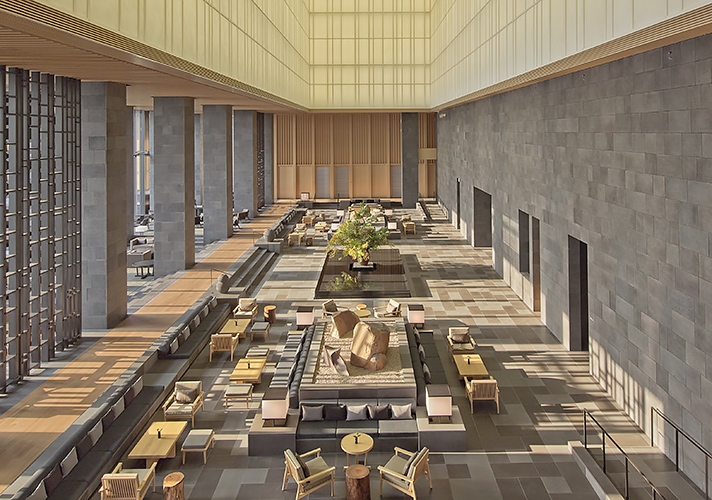 Up until now the hotel chain Aman Resorts has only offered sanctuaries of wellbeing at beautiful holiday destinations. But times change and Aman has opened a new state-of-the-art place in Tokyo.

Those who have already had the pleasure of staying in a hotel owned by the Aman Resort Group know, that the brand is the upholder of good taste. Symmetric parks, beautiful gardens and swimming pools and rooms with this one-of-a-kind simplicity. After opening the first resort in 1988 in Phuket, Thailand, the group has erected a total of 26 hotels, all of which are modest, chic, unpretentious and expensive. However, up until now, fans of Aman hotels could only check in to places like Bali, Phuket, Bodrum or The Philippines. In 2013 the Aman Canal Grande was opened in Venice. George Clooney chose this stately place as the location for his marriage to Amal Alamuddin. A hotel can’t get a better PR than this. However, travelers don’t see Venice as a major city, let alone a destination for business trips.

Currently Aman is daring to enter the business travel sector: The first Aman hotel in Tokyo (it is also the first in Japan) has opened in Tokyo’s banking quarter, Otemachi on the 22. December 2014. It’s got 84 rooms with a view over the imperial palace gardens, an enormous lobby, three restaurants and a 2,500 square metre wellness area. So, in the near future, you’ll be able to relax and recuperate right in the middle of Tokyo.