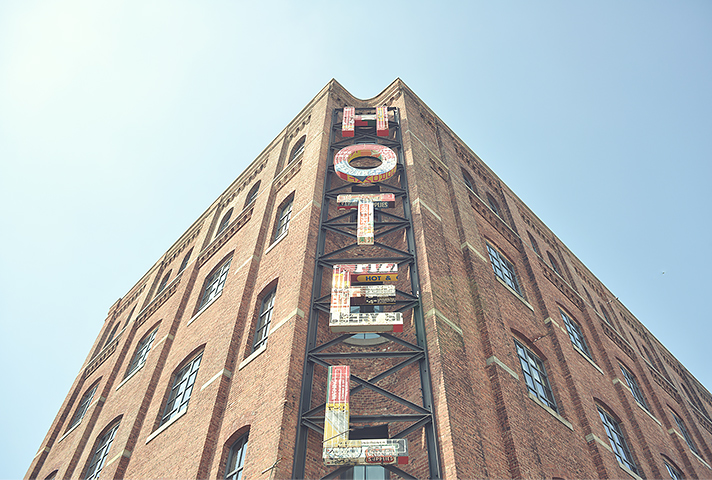 New and spectacular, especially the evening vista of the Manhattan skyline: the Wythe Hotel in Williamsburg, Brooklyn. All their products come from the neighbourhood – but: is that an advantage in New York’s industrial area?

For all the non-insiders: Williamsburg is a part of New York’s district of Brooklyn and this Williamsburg was predestined to became an “In” part of the city over the last few years, simply because the rents in Manhattan had become to expensive for the creative people living in New York. Williamsburg is not particularly pretty, it just has lots of nice cafés, many hip shops, even more hip residents, who are now turning Williamsburg into a kind of second Meatpacking district. The Wythe Hotel has now opened its doors bang in the middle of this. First detail: The artist Tom Fruin wrote the word “Hotel” covering four floors of the facade. At night the letters are illuminated at the corner of North 11th and Wythe Street in red neon. The house used to be a cooperage (a firm that produced wooden vats and tubs) and was built in 1901 and was magnificently renovated by Morris Adjmi architetcs. The building with only five floors has been completely restored from the lobby to the roof terrace.

The view from the top rooms and the roof terrace is a spectacular sight of the Manhattan skyline. The main attraction is the enormous windows. Only the furnishings of the 72 rooms are faintly frugal. In return you get quality: soft terrycloth towels; home made ice cream in the mini bar and heating under the cement floor.

If you’re afraid of being to far away from the centre of Manhattan, you’re mistaken: the underground trains (the stop is Bedford Street) will get you to the city in ten minutes, but whoever stays in Williamsburg, normally stays there and looks at the transformation that has taken place to this industrial area. By the way, the ladies can find really nice shops here: all that they need can be found surrounding the Paul Smith Sale Shop in 280 Grand Street.

Three day get to know the Williamsburg scene weekend. Hipsters officially welcome at this place!

Double rooms from about 180 euros plus a few taxes.